Sleep apnea falls under the category of sleep-disordered breathing. This can happen hundreds of times each night, making it hard to get the rest you need.

What are the Sleep Apnea types?

Obstructive Sleep Apnea (OSA) is where your upper airway gets partially or completely blocked while you sleep, causing you to wake up to breathe. This obstruction causes your chest muscles and diaphragm to work harder to open up the blocked airway and draw air into your lungs. OSA is associated with a reduction in blood oxygen. (This type is more common).

Central Apnea happens when the brain fails to send the right signals to your muscles to make you start breathing. (This type is less common.) “Sleep apnea may be noticed more by the bed partner than the sleeper,” says Dr. Lindner. “Your bed partner might notice that your breathing pauses or they are wheezing, having difficulty breathing like through a straw. Central sleep apnea is less commonly referred to as a sleep condition affecting less than 2% of individuals. CSA patients may experience stopped, slow or shallow airways during sleep, resulting in ill communication between the brain and the muscles involved in breathing patterns. 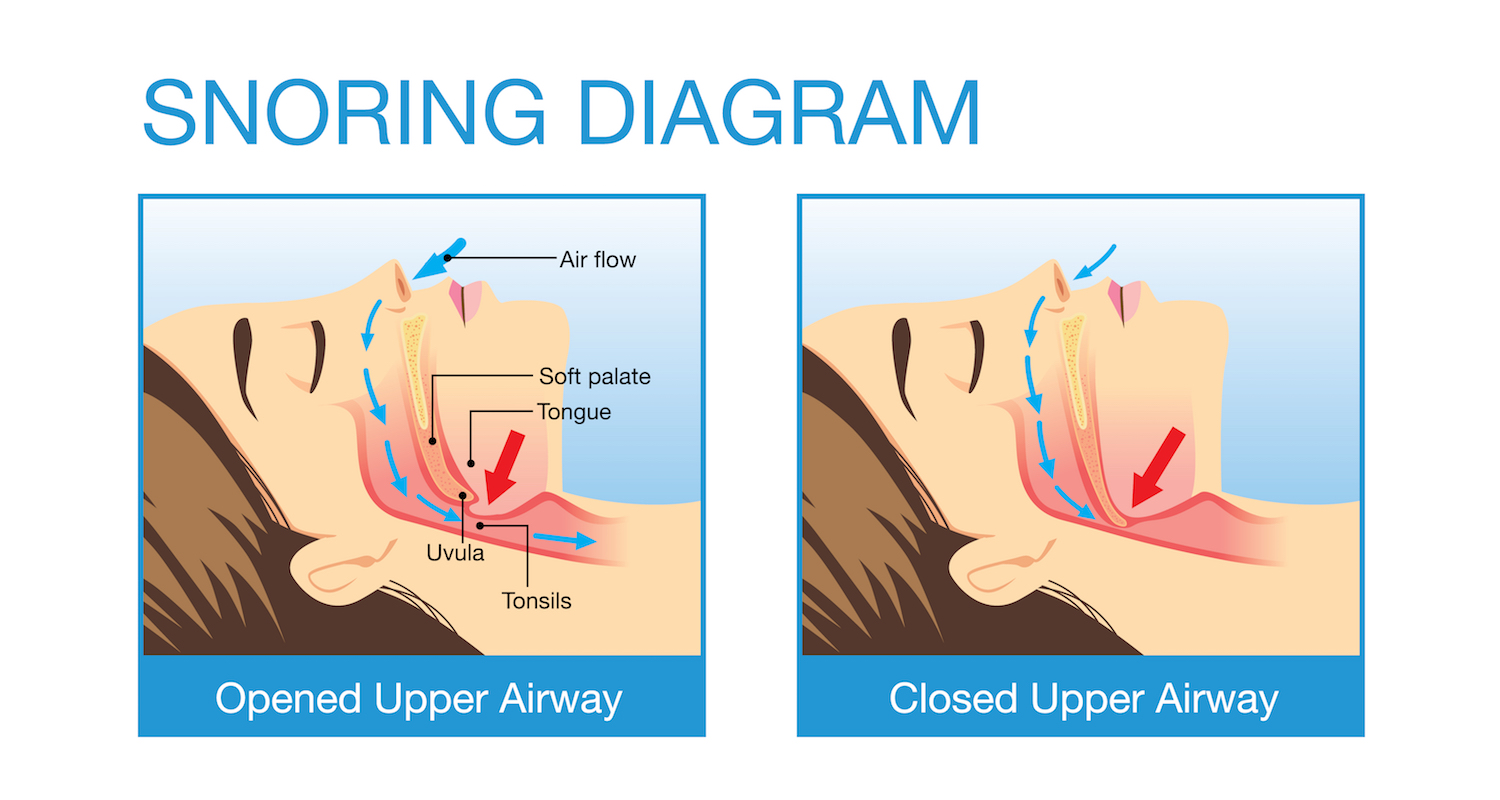 Which sleep apnea is worse?

Sleep apnea is a sleep disorder that affects 40 million adults. The more common, obstructive sleep apnea (OSA) accounts for 88-90% of the cases. Approximately 1 in 3 males and 1 in 5 females over 65 suffer from OSA.

Obstructive sleep apnea is the most widely diagnosed form of Sleep Apnea. It is defined as the partial or complete collapse of the airway obstructing the flow of air. Now, most people think that when you fall asleep, you no longer breathe. In reality, your body “gives up” breathing only in a minimal range of situations. One of those is when your throat muscles cannot sustain breathing while sleeping with an open throat and a jaw slightly opened more than 15 degrees.

The dangers of uncontrolled sleep apnea

Many people know exercise is the best way to improve your cardiovascular function. But sleep has an impact on heart health. Undiagnosed sleep apnea can also cause a higher risk for cardiovascular disease. Is it scary? Often people don’t realize it’s a common problem.

Are you tired of being tired? If so, it’s time to call Dr. Lindner at Dental Sleep Medicine of Greenville or a health care provider and schedule a sleep study. You could have an undiagnosed form of obstructive sleep apnea (OSA), the most common form of sleep-disordered breathing (SDB). OSA is a dangerous condition that leads to high blood pressure, strokes, arrhythmias (erratic heartbeat), cardiomyopathy, heart failure, diabetes, obesity, and heart attacks. Two hundred million Americans are affected by sleep-disordered breathing. Excessive daytime sleepiness can lead to serious health consequences. Thousands have been successfully treated for sleep-disordered breathing, significantly improving their quality of life.

Snoring is a sound that has been compared to thunder. It occurs during sleep when the soft tissue located in the back of your mouth and airway vibrates during breathing.In men snoring is more common, however it does occur in woman also.

Snoring tends to be the most disturbing to your bed partner. Loud snoring can also awake the person who snores. Loud and frequent snoring is a common sign of obstructive sleep apnea. If you are looking for a qualified top snoring dentist you have come to the right place. Dental Sleep Medicine of Greenville is dedicated to helping you get a sound night of sleep.

The following conditions can affect the airway and cause snoring:

Your mouth anatomy: Having a low, thick soft palate can narrow your airway. People who are overweight may have extra tissue in the back of their throat that may narrow the airway. Additionally, if the uvula is elongated, airflow can be obstructed and vibration may increase.

Nasal problems: Chronic nasal congestion or a deviated septum may contribute to your snoring.

Sleep apnea: Snoring also may be associated with obstructive sleep apnea (OSA). This is a serious condition in which your throat tissues partially or completely block your airway, preventing you from breathing during sleep. Oral appliance therapy can help to mitigate the effects of snoring or sleep apnea.

There is a definitive correlation between sleep apnea and temporomandibular disorders and effects on the temporomandibular joint (TMJ). When a person with obstructive apnea has many cease breathing episodes, the body’s fight or flight survival response kicks in to get air. For this to happen, the brain releases epinephrine and orders the muscles of mastication to contract. This action causes the lower jaw to open up and move forward, allowing air to get in. However, the forces of this bruxism movement at the expense of the muscles cause violently stretching. The person involved then seeks out a TMJ Expert. As we established early on, 80% of the population with sleep apnea go about their way undiagnosed. Therefore, 1 in 5 adults has obstructive sleep apnea (OSA). It is my opinion that this should be considered a national emergency.

Obstructive sleep apnea (OSA) is a sleep-related breathing disorder that involves a decrease or complete halt in airflow despite an ongoing effort to breathe. It occurs when the muscles relax during sleep, causing soft tissue in the back of the throat to collapse and block the upper airway. This leads to partial reductions (hypopneas) and complete pauses (apneas) in breathing that last at least 10 seconds during sleep. Most pauses last between 10 and 30 seconds, but some may persist for one minute or longer. This can lead to abrupt reductions in blood oxygen saturation, with oxygen levels falling as much as 40 percent or more in severe cases.

The brain responds to the lack of oxygen by alerting the body, causing a brief arousal from sleep that restores normal breathing. This pattern can occur hundreds of times in one night. The result is a fragmented quality of sleep that often produces an excessive level of daytime sleepiness. Most people with OSA snore loudly and frequently, with periods of silence when airflow is reduced or blocked. They then make choking, snorting, or gasping sounds when their airway reopens. A common measurement of sleep apnea is the apnea-hypopnea index (AHI). This is an average that represents the combined number of apneas and hypopneas that occur per hour of sleep.

It has been estimated that 20 million Americans suffer from moderate to severe obstructive sleep apnea (OSA) and at least one person in five (65 million Americans) has mild OSA. The current medical healthcare system is failing to recognize and diagnose these problems.

The rate of motor vehicle accidents is seven times higher in patients with sleep apnea than in the average population.